New Year Firework 2017 celebration in Prague was not so succesfull due to bad weather: low clouds and mist. I’ve plan to make image of Charles Spa with Charles Bridge in the front, however weather condition disallow visibility of bright firework fired from Letná/Metronome.

Many people has disappointed as they expected great show, I’ve listened to people stay in crowd behind me. The disappointment was underlined by unsuccesful last year, where firework was moved to Žižkov, and visibility was – have to say – almost nothing for all places in Prague. And this year the situation repeated. According to news, the fireworks costs 1M CZK, but it was waste of money from point of view of many people attended to event.

Despite those negrative conditions described above I has been able to capture this image above, and to be very honest, it was the first image I made. After that, only colored clouds with some small strikes was visible, so I deleted most of my work. The postprocessing was made from blending of two images – the base of 15s image taken before firework and the first image from firework start. Then I used Nik Color Efex with Big Sky filter. Final touch was RayaPro’s Contract Punch, Light Vignette and sharpening.

Hope the year 2017 will be more clear for everybody than its start! 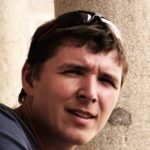 Hi there!I'm an avid landscape and ...

END_OF_DOCUMENT_TOKEN_TO_BE_REPLACED

How good is it hearing that waterfall... more»

There is no doubt that Patagonia is... more»